Emily’s photograph arrived while I was away. I was on a road trip with my wife and son down to San Diego and back. We’d spent the better part of two weeks covering the West Coast, and the date stamped on the notice from the post office tells me her picture arrived while I was somewhere in the Sacramento Valley. As the mail carrier knocked on my door, I was likely speeding through sere grasslands toward the foothills, where our little hatchback would grumble as the elevation gained and the big rigs hauling fruit and spools of cable toward the border would groan even louder.

Or maybe we hadn’t made it that far yet. The miles, as they multiplied, also subdivided, erased in the haze of the wide, torrid valleys. For all our speed we were moving slowly, and all our distance had taken us, it seemed, nowhere. And this is just what we had needed after a few hard years, to unravel in this slowness and be washed by the land rushing past. To not be, as on a plane, exempt from the unprivileged points between beginnings and ends. Yet not entirely subject to the frictions of distance either.

The interstate we travelled for miles and days through California and Oregon passes near where we live, where Emily’s photograph has arrived on this stop of its journey. Under the overpass where the interstate crosses the ship canal there is a small homeless camp, one of countless camps under bridges and unclaimed spaces inside and around the city. Regularly, tents appear in that dark trapezoid like mushrooms that some invisible hand later culls so that one day, I see on a walk to the park with my son, they are gone—at least until they spring up again. 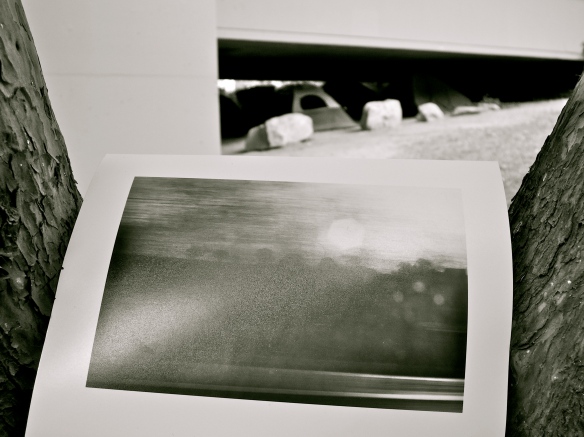 A guy once told me on a city bus, when the buses were still free downtown, that he and his wife, who was napping beside him, wouldn’t go to the shelters anymore. He said it was better to camp out, even during the rain, and bet the police that would eventually come and kick them out would do so without hauling them to jail. “The shelters aren’t safe,” he said, “too many things happen there. And we can cook outside. We just went to the camping store and got a bunch of propane. Anything you bring to the shelter just gets taken by somebody. Outside, we at least can take our chances.” 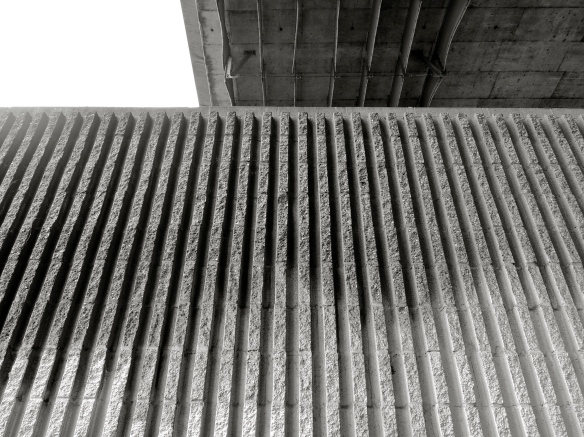 A wall can be a barrier and a shelter. I realize more and more the ways we can connect and go missing. This photograph found me, away, almost as easily as it might have found someone down the street in the building with my street number’s middle digits reversed—3621 instead of 3261, the error of a mail carrier daydreaming. But it was a hot summer’s day, we would have said, and his thoughts were climbing over a wall, taking their chances. Maybe they were and maybe we would have, having seen them before ourselves, inching upward, into the foothills of their own belief.